As part of our summer travels, A & I decided to finally visit Mexico this time around. We had been to the border near Tijuana a few times but always on the US side and it was high time for a trip to Mexico. We took a flight out of San Francisco leaving early morning and getting to Mexico City early afternoon.  With our Pakistani passports the lady at the Aero Mexico counter did a little running around to make sure our trip was kosher, but she was very polite, almost apologetic about it.  The immigration at Benito Juarez Airport was a breeze. We had booked a ride in advance, an hour after landing we were at our apartment in the Puerto Alameda Suites.

This complex is located in the Zocalo neighborhood of the city, and several travel sites recommended it as the ideal place to stay when visiting, advice I concur with now. Our hostess L, was there waiting for us outside the apartment and soon we were

all settled in. The apartment complex has a nice pool and a little coffee shop which sells basic groceries as well. We had a nice dinner at El Rincon Tapatio  across the street, took a little walk along Av. Juarez to the Museo Bellas Artes. Its a very nice walk, with lots of people out and about enjoying the evening and some street artists entertaining the crowds. Walked home around midnight and called it a day.

The next morning after waking up late, we had a leisurely breakfast in the apartment and

went out to explore Zocalo. Like any big city there loads of name brand stores around, but what gives this place character are the local shops. Had lunch at the main square and mulled around taking in the sights and sounds. We also wanted to do some groceries so we looked for a supermarket which was a little difficult to locate. Came back to the apartment for a siesta, after all when in Rome!! In the evening we checked out the gym and pool in the complex, took a long walk exploring the neighborhood. 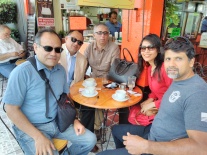 That morning as per plan, H arrived to give us the grand tour of his city. In his words ‘to keep it real’ we first went to ‘Portales‘, waited at the train station for J and C. J is supposed to be an expert on the hangouts in the city and a

college buddy of H. He took us to a café for a much needed and great cup of coffee. We then strolled over to a covered market, where we sampled some of the goodies and on H bought us a

special brand of cocoa. Outside the main market there were a rows of shops selling odds and ends, from used TVs to plumbing items, a somewhat strange mix. Everyone was good and hungry by now and we proceeded to ‘La Oaxaquena’ for some good 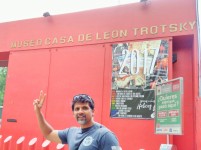 Mexican food. Their pozole soup and different mole dishes were yummy. Next stop was the rather touristy and fashionable neighborhood of  Coyoacan, where among other things of interest are, the

Frieda Kahlo and Trotsky museums. Alas, we arrived too late and visiting hours were over, but we did walk around the neighborhood, which was quite pleasant. We ended p at the main square where we had some snacks and really good Mezcal, perhaps a little too much of the mezcal.  We bade farewell to the gang and took a cab back to the apartment, saw firsthand the crazy Mexico city traffic on our way back.

We had booked a private tour through our host at Puerto Alameda. I thought the tour would take us to Teotihuacan and back, but it turned out that it was a more extended deal. The tour included a visit to  Tlatelolco and Guadeloupe as well, more on that

the Plaza de las Tres Culturas. Three cultures are represented here form three different eras, Aztec, Spanish and Modern times. These are represented respectively by, remains of an Aztec temple, a Church from Spanish period and a housing complex form the 1960’s. S was very informed about the history and took us through an extended tour, lasting for about an hour. There is also a memorial to the 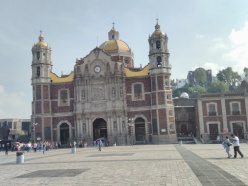 brave students who lost their lives in the ‘Tlatelolco Massacre’  during a crackdown during a protest in 1968. The next stop was the church at Our Lady of Guadeloupe. The original church still stands atop a 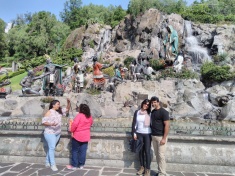 hill, and a bigger complex stands at the base of the hill with several buildings including a recently built extension to the church. The church building has started to sink as like most of Mexico City it was built on the site of an ancient lake,  and much work has gone in stabilizing this. The grounds of the

church are beautiful and we spent a bit of time walking around and admiring these. After about a couple of hours here we were on our way to Teotihuacan, which is well known for the  Aztec pyramid sun and moon temples. Since we were a little hungry by this time we stopped by a

gas station on the way for some coffee and pastries. S, also pointed out the sprawling ‘lost city’. Contrary to most cities I had seen where the rich live on higher grounds here it seems that the hills surrounding the city is where the migrant workers and laborers have found a place to live. According to S, the

government had all but given up on the neighborhoods but of late some infrastructure had been developed along with a cable car system. The car ride to Teotihuacan took about an hour. But may I say it was completely worth it. S, took us around explaining various buildings, many of which are modern restorations. We stopped by one of the many stall that artisans have set up around the grounds, took a look at the sun through some volcanic rock, saw how natural ingredients were used to obtain various colors, including a nice scenery that A received as a gift.  Once we

reached the ‘Avenue of the Dead’ which lead to the Sun and Moon temples S took off for a rest, while A and I climbed up the pyramids. The sun was quite strong and the climb a little strenuous, but totally worth the view from the top. We met S, at the agreed upon meeting point and he took us to an adjacent complex, where one could sample some good mezcal and tequila and also purchase some handicrafts. Had a nice lunch at a nearby restaurant and headed home.

After a lazy morning we took a stroll to Zocalo, A wanted some good tea and H had advised to visit El Palacio which is where he gets his tea, the shop is definitely worth a visit. We had lunch around the main square at Zocalo at ‘Mexico Viejo Restaurant’ another good discovery. We had a dinner invite to H’s house which was near Xochimilco, after a 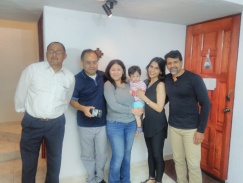 little mix up with the Uber driver we were on our way.  Let me say it again, Mexico city traffic is bad, it took us more than an hour to get there. H and A were excellent hosts and we finally got to meet little S, who is adorable. Quesadillas and Tamales were on the menu and I think I overate since it was all so delicious.  After eating and may I add drinking a little too much we headed home.

We decided to take it easy on our last day in Mexico as we had to take an early morning flight to Peru. We visited the Mercado San Juan,

took in the sights and sounds, and bought some fruit. had a nice leisurely lunch near out apartment. After a lazy afternoon we went to the Palacio de Bellas Artes  and just hung around the area. Our cab arrived promptly early morning and we were on our

way to the Benito Juarez Airport bidding farewell to a city, for now, as  we are sure to come back and explore more of this wonderful country.