Next on the itinerary was the city of Bursa. With known settlements dating back to 5000 BC, the city was conquered by the Ottomans in 1326 AD and it became their first major capital. The city lies in the shadow of  Mount Uludag, which is part of the Uludag National Park. To 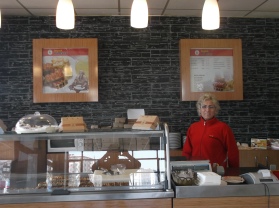 get to Bursa from Istanbul one essentially needs to do a little  loop around the Sea of Marmara, which takes about 3 hours. But getting out of Istanbul is a challenge with all the traffic, as we learned the hard way. The drive itself was pretty boring as you go through industrial areas and some uninteresting towns. We made a pit stop at 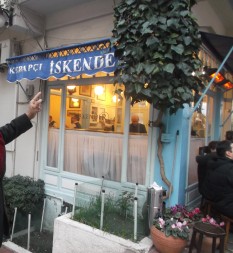 a little cafe form some Tea and Pastries, the place for run by a very nice lady, and despite the fact that the  language gap did not allow us to have a long conversation, we did manage to have a nice little chat with her. Closer to Bursa the scenery got better and the drive less stressful as a consequence. We had booked a room in the Hampton by Hilton, this turned out to be a few miles outside the old city. The room was pretty standard as one would expect from a chain. Of

course we had to drive to the city or take the bus as it was a little far to walk. After a little rest and a coffee at the hotel we made our way to the old part of the city. I wanted to check out the famed ‘Kebapci Iskender‘, which claims to be the birthplace of the Iskender Kebab. This turned out to be a smallish place, and the line was pretty long. Since we 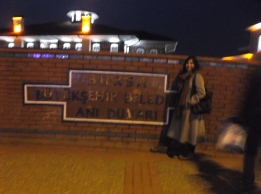 were rather hungry we decided to find another place to eat, which turned out to be a great decision. We stumbled upon this nice restaurant ‘Beyler Kebap’ a place we liked so much that we came back for dinner the next day.  We strolled through a covered market on route to the ‘Ulu Camii‘,  we got some roasted chestnuts (kestane) which  hit the spot in the cold weather. The Ulu Camii was commissioned by Beyezit I and completed in 1399. Compared to the other historic mosques, it is not that big, but impressive calligraphic art work gives it a unique character.

By this time we were quite tired and it was time to head back to the hotel. The plan was to go to Uludag the next morning. We got up bright and early and after a good breakfast we headed out. There is a cable car (teleferik) which connects the city to the Ski Resort on Uludag, it was a little bit of work figuring out where exactly  the cable car station was, but after a bit of asking around we finally got there. It was rather cold and snowing a little by the time we got to the resort. The teleferik ride is nice and takes around 15 min, with beautiful view of the city and the mountains.  There is a barbecue place where you grill your own food after purchasing from a selection of different cuts and kebabs. 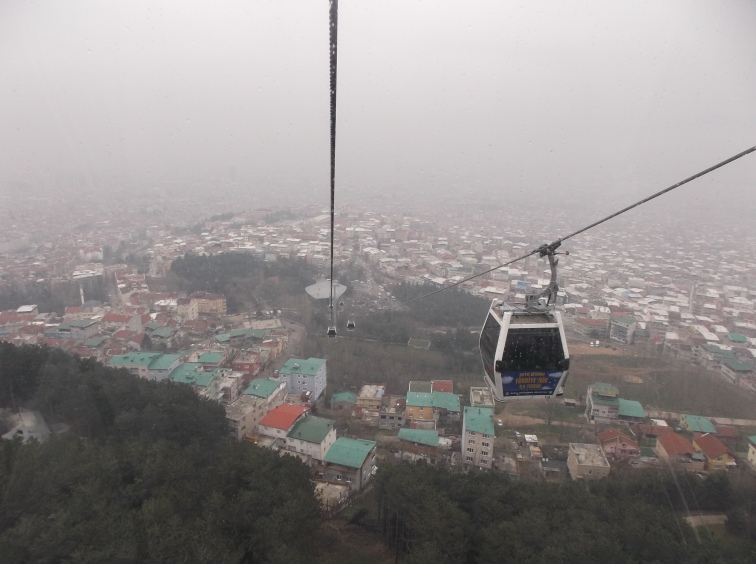 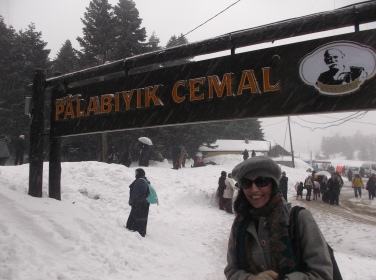 It was a lot of fun and I would highly recommend it on a visit to the area. They also serve you a huge carafe of Turkish tea, with the samovar right at your table. We spent about a couple of hours cooking, eating and then just taking in the views. By the time we headed back it was afternoon. After a little rest we headed to the old town, strolled around the bazaar, sampling the goodies on display and came back to our hotel somewhat late in the evening.

We were back on the road in the morning , after some coffee and porridge at the hotel. 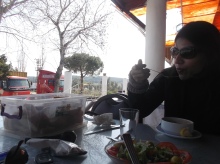 We stopped by a roadside cafe for some breakfast, got something more like a brunch but it was pretty good. It is around 5 hours from Bursa to Izmir, but the drive is beautiful and the time flies by. We got into Izmir around 4 pm but then the GPS stopped working so we were pretty

much on our own. Overshot our destination and ended up around Ege University in Bornova district of the city. Since asking for directions wasn’t working too well, I actually hired a cab to guide me to the hotel, a scheme that the cabbie found hilarious, however he did get us to our destination, the Hotel Villa Levante.  The hotel is quite artistically done with attention to detail, its a small place with 11 rooms and has a restaurant on site. We had a very nice dinner at the restaurant, I would highly recommend the place. The plan for the next day was to visit Ephesus in the morning and explore a little bit of the city in the afternoon. After a good breakfast at the hotel, we set out for Ephesus which is about an hours drive from Izmir. 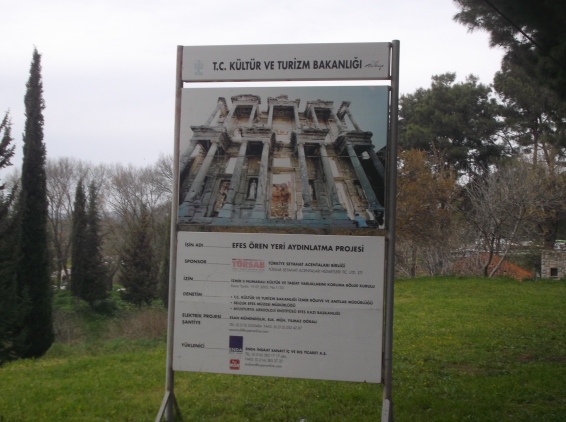 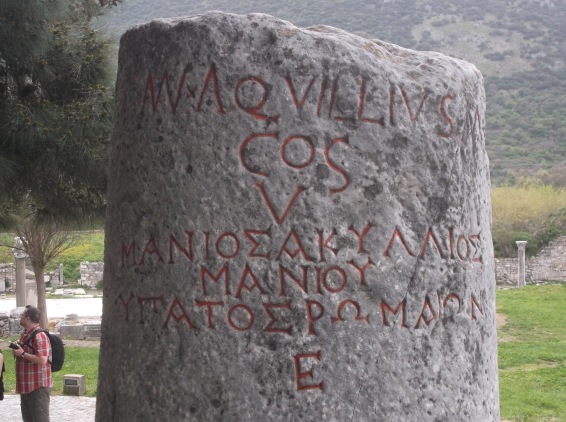 Traces of civilization dating back to 6000 BC have been found in the area. The most interesting ruins are from the Roman era and the early christian period. The Great theater was the most impressive structure on site. One can get audio tours and I would highly recommend 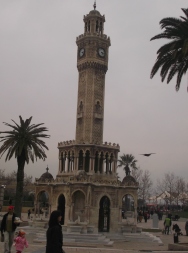 it. Although one can spend an entire day here, we stayed of a couple of hours before heading back to Izmir. In the afternoon we headed to Konak Meydan, the central square in Izmir. There is a market and a pier close to the square. One of the landmarks here is the old clock tower built around the

turn of the last century. Although it was drizzling but we had a nice leisurely stroll by the pier stopping at a cafe for some coffee and pastries. We then walked the square taking in the sights and sounds.  After a quick dinner at the nearby market we called it a day.

The next morning after checking out, we headed to Fethiye ………(coming soon)