Going on a lonely mountain road, you notice a bunch of bikers riding staggered with a beat up old ford truck following them, sounds like the opening shot from a bad movie! That is exactly what I saw in one of the rear view mirrors on the bike, somewhere in rural Colorado. Just to be sure I increased and decreased my speed the gang of riders matched it, that is when “Easy Rider” and “Deliverance” flashed through my mind. Fearing the worst I tried to make a run for it, navigating 15 mph curves at 50-60 mph and as a result slipped and crashed into a fender. Thankfully I escaped with a few bruises and the bike too had minor damage. The bikers caught up soon enough and surrounded me, as I took off my helmet and prepared for a ‘last stand’, they saw it was an Indian looking dude and I guess not a rival biker gang member, they grunted and took off…phew!!!! The bike seemed to ride fine despite a few dings and a fork seal which had a spring a leak. This was day 3 of the trip promised a lot of adventure.

I had a research visit planned at OSU in Columbus OH, and as it had been 4 years since the last cross country motorcycle trip, I thought this would be a good time to bike across and back. I flew in to San Diego as usual. Spent a few days in San Diego at M’s, visiting old haunts at Balboa Park, Coronado and Old Town. This time around I also got a chance to visit the old mission dam in San Diego county. 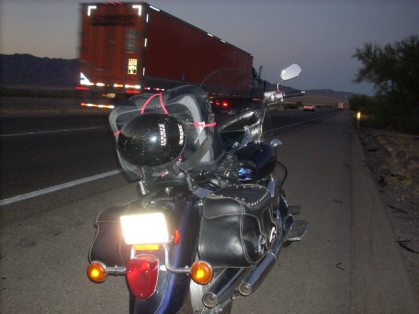 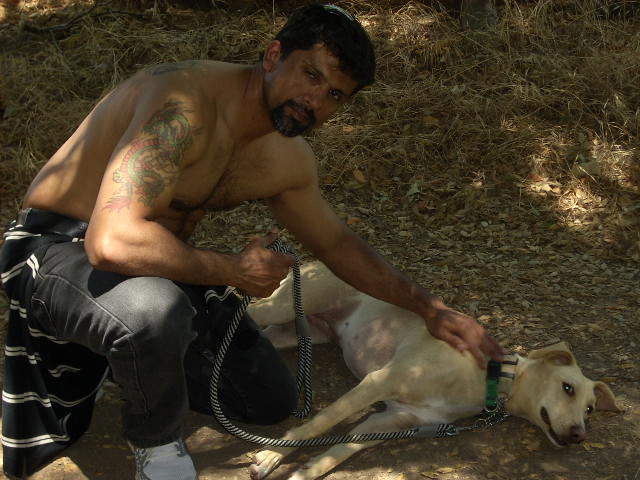 Took the I-15 from San Diego on way to Vegas, it was around noon by the I was on the road,  I stopped by Calico, which is an old silver mining town now abandoned and a tourist site. It was dusk by the time I got to an exit saying zzyzx road, this it turns out is an old collector road leading to some science station managed by the University of California, but in the low light it looked quite sinister. Since I was god and tired I decided to pull off at the next available accommodation, Jean NV was the next town a few miles short of Vegas, where I found good accommodation at the Goldstrike Casino. Played some slots, had a good meal and called it a day.

Hit the road early the next morning as it promised to get pretty warm by midday. I followed I 15 N, till it hit US 50. US 50 has earned the moniker of “Loneliest Road in America“; a sign saying ‘next services 105 miles’ provided a welcome to the loneliest road! The two odd hours I was on this section of US 50, I probably saw two other cars in either direction,  and towards the end of the stretch the bike nearly ran out of gas, I had to put on the reserve, another 30 nerve racking minutes later I finally came across services and filled up. The ride which takes one through the Fishlake National Forest is beautiful and refreshing.

By the time  I reached Green River I was bushed and decided to stay there checking into a motel. Had a good hearty meal at ‘Ray’s Tavern’ , walked around the town and took a small trip to the Green River State State  Park, before calling it a day.

Was back on I 70 the next morning, heading to Colorado, this was perhaps the most scenic ride I have done on an interstate. The  road runs along the Colorado river, trough an ever changing terrain. Took a small detour to visit the continental divide at the Loveland Pass the ride up to the pass was a little challenging and provided a fun biking opportunity. Back on the highway there was a major pileup, these were the good old days (at least for me) of navigating using a Rand McNally Atlas,  I pulled off to a shoulder and rerouted my way. The new route took me trough the “Centennial Cone” and “Clear Creek” Parks via US 6. 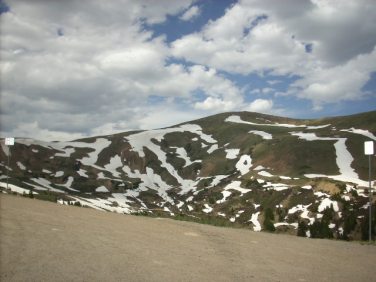 That is where the whole ‘getting-chased-by-bikers’ episode occurred. As I slipped and crashed into the fender, my only thoughts were about fudge (my dog back home), these flashed through my mind as I slipped, and who would take care of her once I am gone, later when I told my mom the story she wasn’t amused about it!! After the bikers left, I dusted myself and picked up the bike. My jacket was pretty torn up and I had a few bruises and scratches, the bike suffered some minor dings. I knew that I needed to take some pain meds and  have a good rest. Got something to eat near Denver and patched up my jacket with duct tape!. Another hour and a half of riding and I pulled off at Limon CO, got some Advil and a subway sandwich, checked into a motel for the night.

Limon CO to Riverside MO to Indianapolis IN:

I woke up the next morning with a moderate amount of discomfort from the fall the day before, my left foot was slightly swollen, had a quick coffee and a waffle before hitting the road. Advil was a life saver the next few days keeping the fever and pain at bay which in turn kept me functional. The terrain turned quite monotonic through the plains, however the roadside signs were interesting, including proof that one was definitely in Jesus country now. One interesting sight going through Kansas was what I believe was a tornado in the distance. 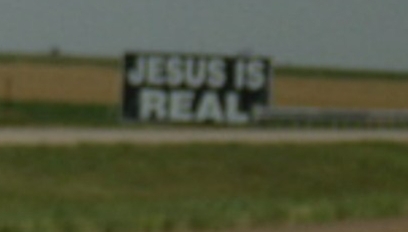 I had decided to relax and pamper myself a little to recover from the fall, and had booked a room at the Argosy Casino and Resort in Riverside MO. I pulled into the entrance to the casino and for kicks tried to get my motorcycle valet parked, the valet guys were quite tickled by the whole thing. Had a great steak dinner at the steakhouse and played some slots before turning in.  I woke up a little late the next morning, even thought of staying an extra day and spending it at the spa, but time constraints did not permit this.

Indianapolis IN to Columbus OH to Troy NY:

Headed towards Columbus OH, I crossed into Indiana. Rural Indiana is beautiful, and may I say people are quite friendly as I had the chance of eating at some restaurants and chatting with the locals. The bike had started to act a little weird, veering to one side, turns out one of the fork seals had ruptured, I was also concerned that the frame might have been twisted slightly in the crash.  Stopping over for a night in Indianapolis, I made it early to Columbus OH the next day.  Since I was visiting the ‘Mathematical Biosciences Institute‘ for a few weeks, I checked into a Redroof Inn nearby. Two eateries in the area which I would like to mention are the ‘Lavash Mediterranean Cafe‘ and the ‘Mozart Piano Cafe‘, I had quite a few meals at these and would highly recommend them. Took the bike to ‘Iron Pony Motorsports‘ who were quite interested in hearing about my ride from San Diego. They gave the bike a detailed once over, and assured me that the bike was in decent working condition although a few parts needed changing, this is another establishment I would recommend if you need motorcycle service. After a relatively fruitful  few weeks at OSU it was time to leave, the last evening there I went to an Italian joint ‘Marcella’s‘ in the Short North district, had a great meal and would recommend the place. 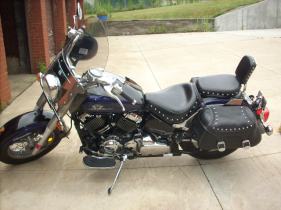 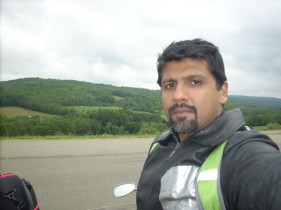 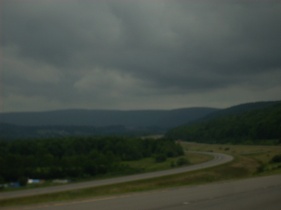 It was time to head out, next destination was Troy NY to see old friends from grad school, stopped for a day in Erie PA, where my buddy R was based at that time. Had a great time catching up with him and took I 90 and then I 88 to Troy, it was very late when I got in. I crashed at N’s place for a couple of days and  then at C’s for a few days, its good to have friends who are delighted when you drop by!. I have always felt that good friends seem to catch up right from where they left, a feeling reinforced by this visit. I also visited my Alma Mater Rensselaer Polytechnic Institute (RPI), met my profs and friends at the math department. Spent a few days hanging out and chilling and then it was time to head out. 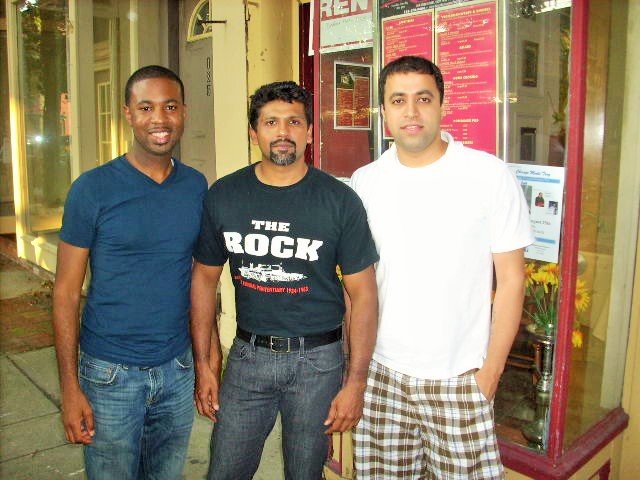 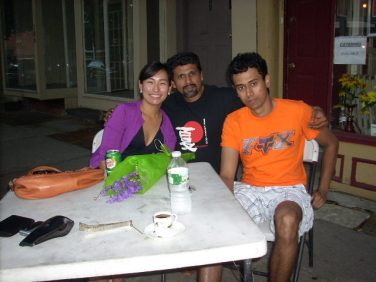 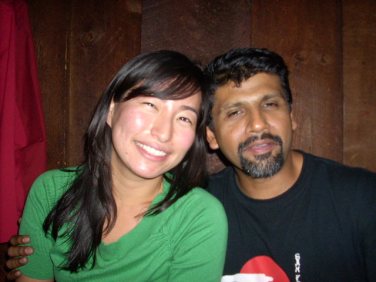 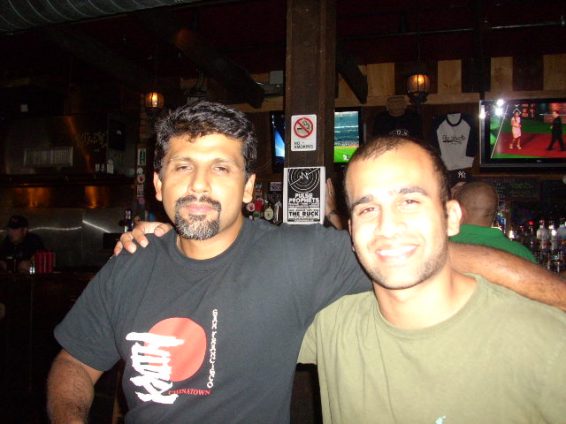